Who's Playing Our Southern Cross Flutes

Every now and then I meet a special person who – like me – has a special affinity with Native American Style Flutes. Some are musicians, and some are everyday people.

It is an honour and privilege to walk a little of their journey with them when I get to create their Native American Style Flute. I am thrilled to be able to showcase a few of these sparkling souls, and the music they put out into the world. Read on.

You’re in for a real treat! 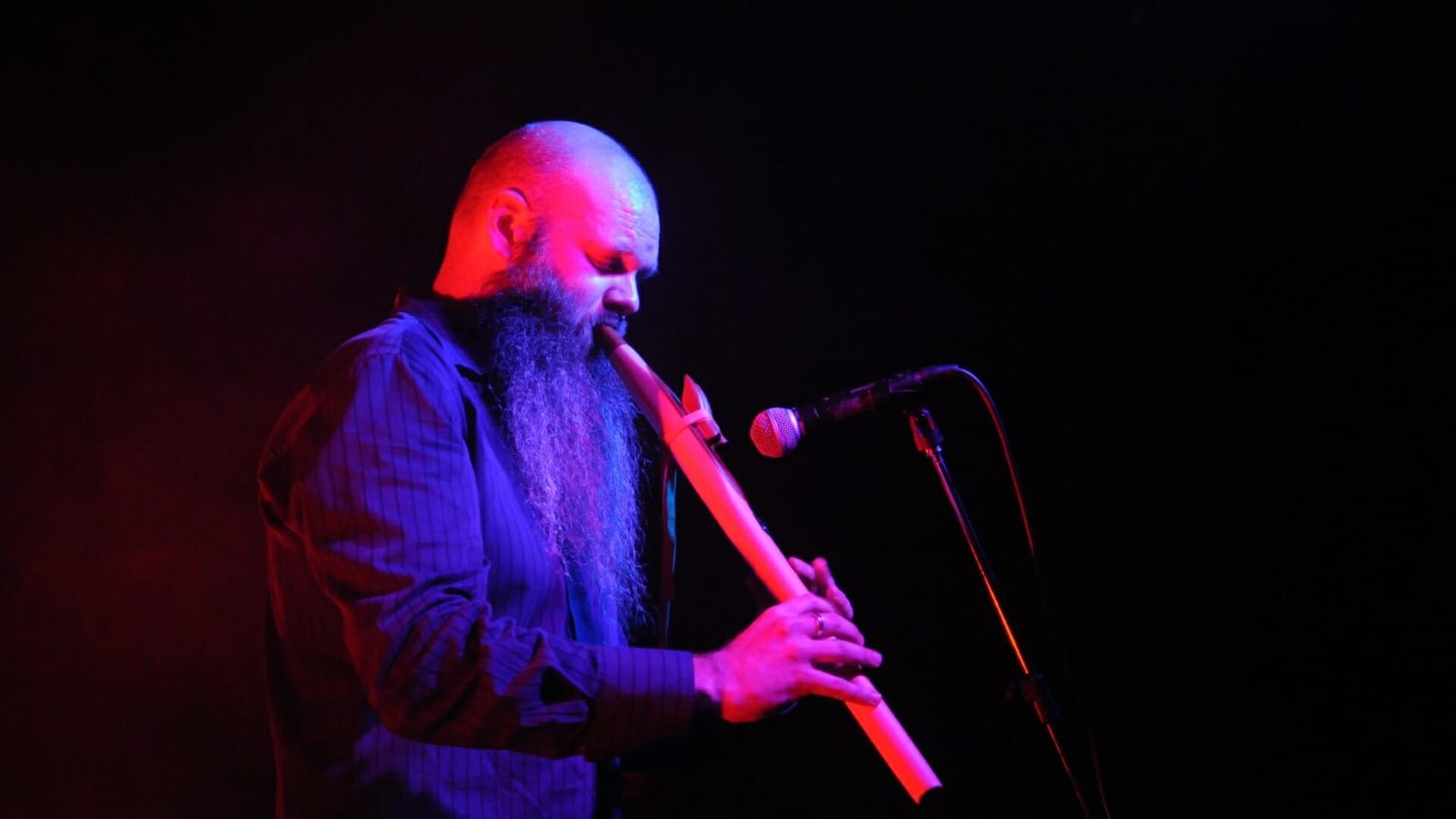 I first met Adam at the Wellington Saturday craft market, where he bee-lined straight to the Harmony Flute at my stall. Watching him effortlessly create an outstanding and powerful melody with this flute on the spot, having never played a Native American Flute before, left me speechless. I vowed to make a special flute for Adam.

It took me a few months to craft a flute that I felt worthy of gifting to Adam. From there Adam travelled the world performing and recording live with his new flute – and adding a few more to his collection – including a specially custom made flute for the international recording with composer John Psathas.

Adam and I have since facilitated Flute Camp Aotearoa together in 2015. 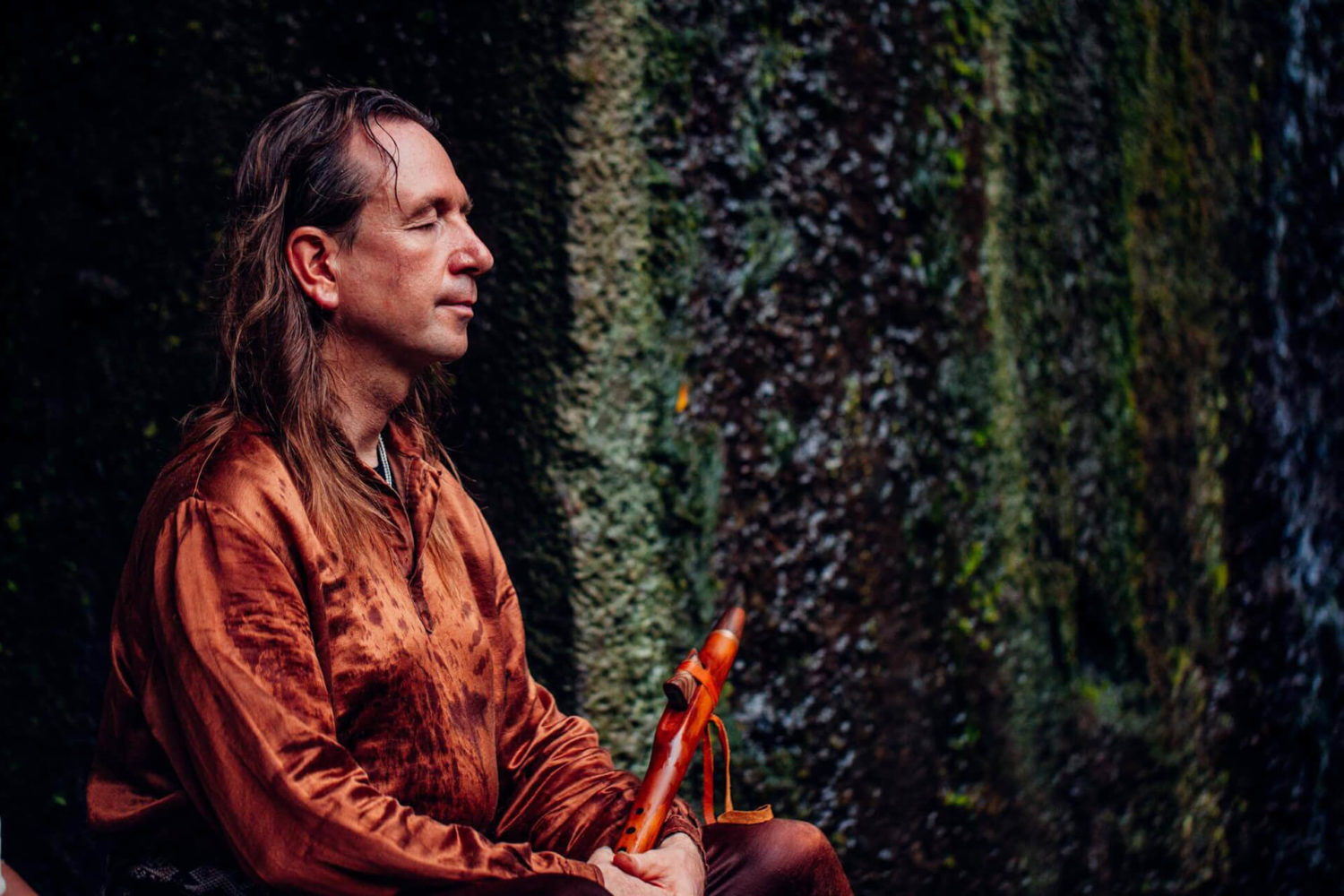 Kokopelli is recognized as a mystic flautist, a multidimensional bridge-maker, medicine person and humanitarian artist.

Alongside his spirit chants and overtone invocations. Kailash is a sacred world music producer, multi-instrumentalist and expert in Sound Medicine. He offers his instruments as prayers to initiate self-healing processes and expanded awareness.

Inspired by his uncountable number of ceremonies and studies with Indigenous Medicine People since age 17, Kailash facilitates prayer circles. He mastered the Native American Prayer Flute as well being one of the first european Didgeridoo players working with the healing effect of sound since 1988.

Aptly, when Kailash asked me to make a flute for him, he asked me to make him a Prayer Flute out of the ancient 40,000 year old swamp Kauri. During his stay at our place, I observed a man who walks his talk; his life is a consummate prayer. I continue to be awed and humbled by Kailash’s prayer offerings composed through his Ancient Kauri Southern Cross Flute. 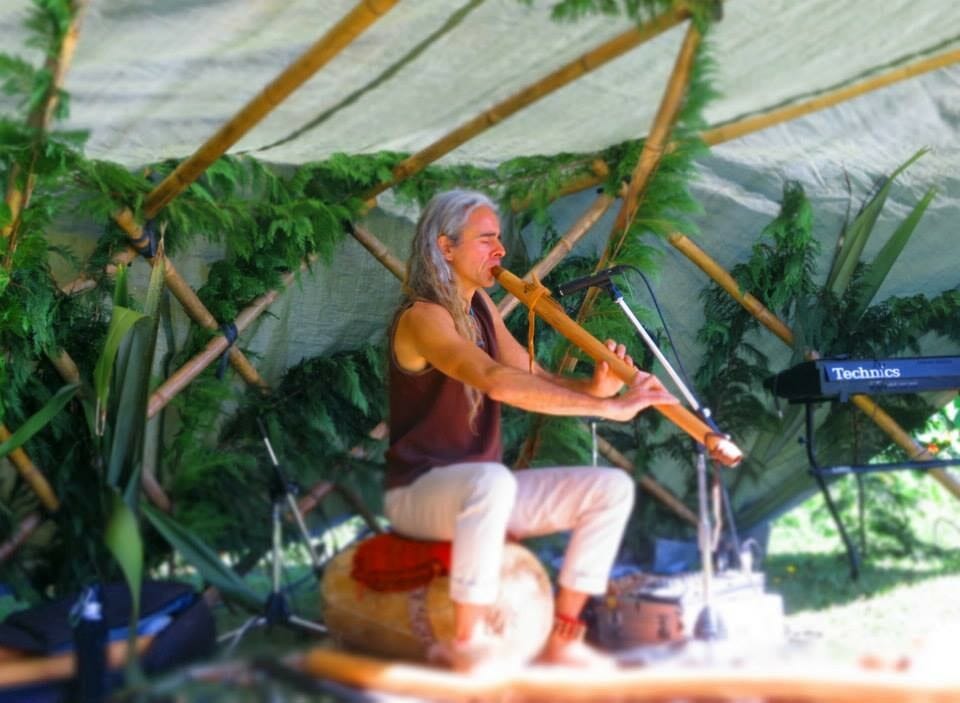 Emerging over 20 years ago, at the forefront of tribal music in the 1980′s, Sika pole-vaulted into the UK music scene and was immediately recognized as a gifted Didjeridoo player. Blending ancient and contemporary instruments, Sika’s music crosses the lines between world, ambient dance and acoustic trance, with a deep sense of reverence and into the deep work of Sound Healing.

I’d heard of Sika, and listened to his music, and I had a feeling that one day – when the time was right – we would cross paths. Some years later, our friendship circles intersected in Wellington, and we finally connected. Since then it’s been a huge pleasure to hear Sika play his collection of Southern Cross Flutes, bringing musical agility and sensitivity to these soul-honouring instruments. 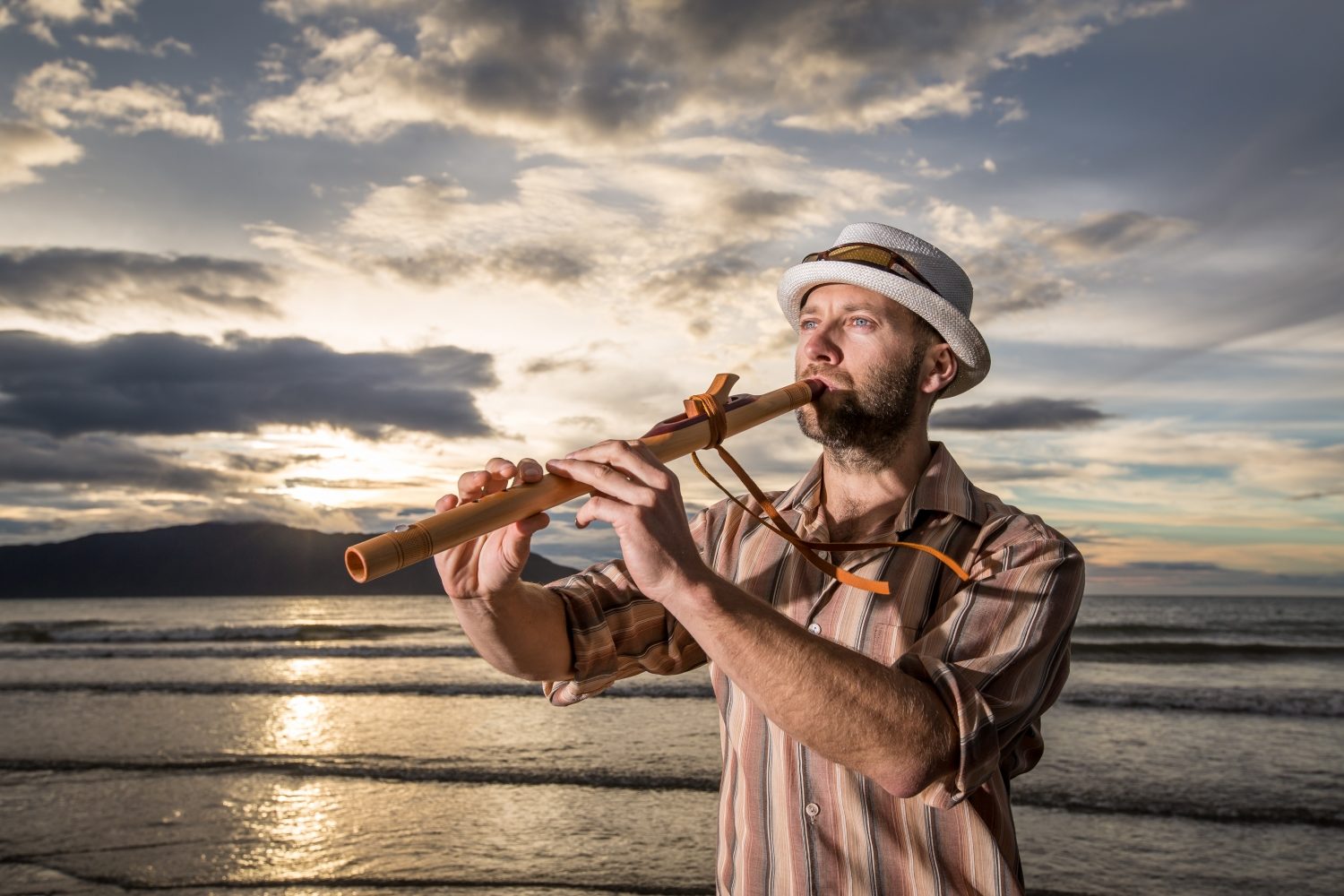 It’s not everyday I get to blow my own trumpet, er I mean flute. But today’s the day!

I had the immense pleasure and honour to be the Artist in Residence at Lochmara for 2 weeks in 2015. During that time I devoted all my energy to creating a Native American Flute album.

Lochmara’s serene and lush natural beauty led me to record some wonderfully successful solo flute improvisations that, blended with the in situ soundscape of the forest, the birds, cicadas and the bees, the lapping waves, and the drizzling rain, allowed me to organically capture my quiet contemplative world of those two weeks.

The production of the album was croudfunded and 2 months later, I happily released my first album.

Prior to the residency, I performed at weddings, funerals, gallery openings, solo concerts, variety shows and at festivals and open mics around the country. Sharing the soul-filled music of Native American Flutes gives me great pleasure. 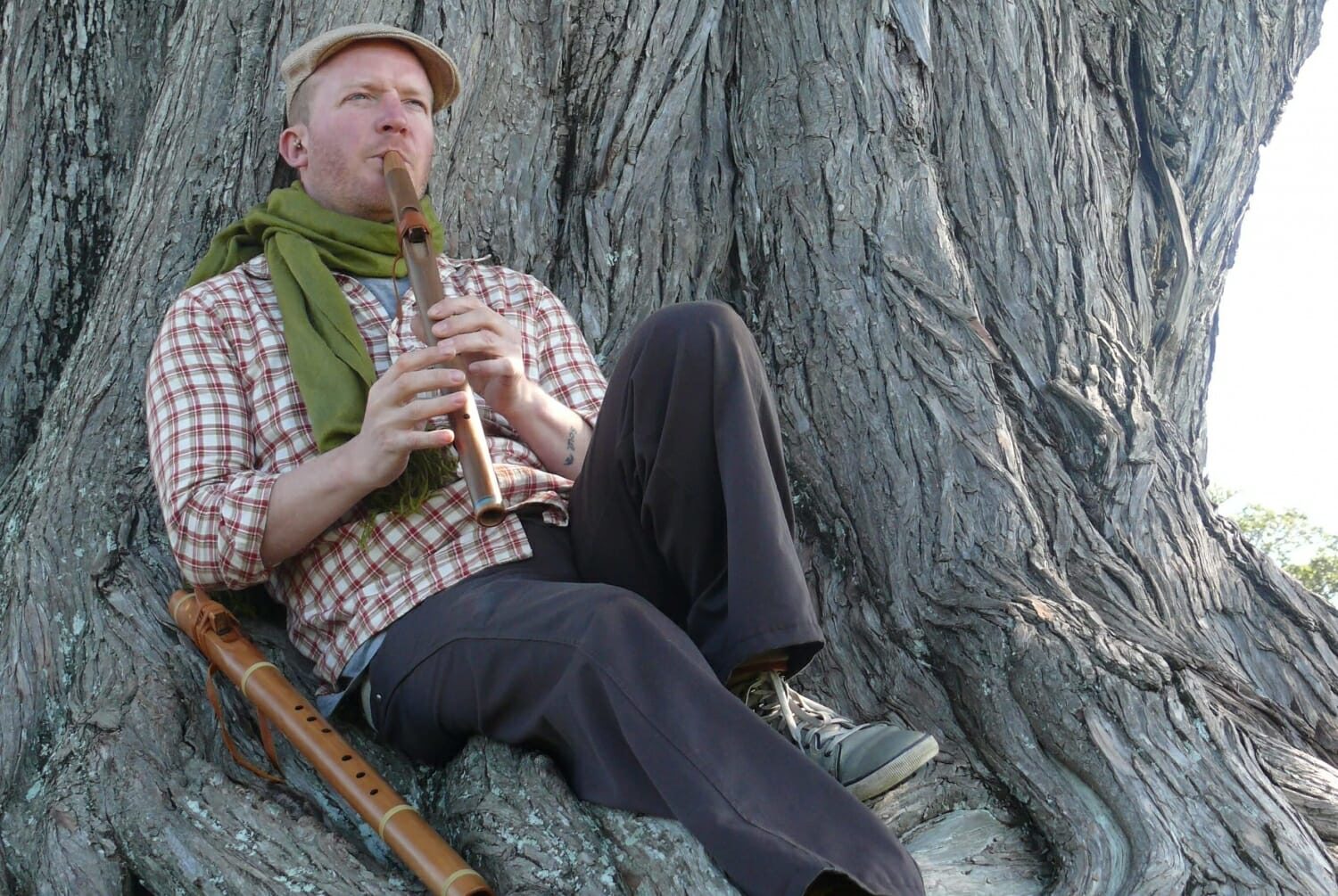 Chewy has been playing drums (Djembe) for about 15 years and has developed a huge passion for all music, especially world music. Because of this he was drawn towards Native American Style Flutes, which he finds to be the most magical of instruments. Chewy has been working with children and young adults for over 3 years using music as an interactive medium and says that flute-playing has been an amazing addition to his creativity, and has also helped grow his love and fascination for this beautiful instrument.

I recall the day Chewy got in touch with me, expressing his interest in the flute and his desire to own one. It took a while, but the day arrived when Chewy was driving down from Auckland and past our home, so we could meet in person, and Chewy could receive his new flute – crafted from Swamp Totara and with turquoise insets. Since then, Chewy’s love for the flute has exploded and I’ve enjoyed seeing him grow as a player and enthusiast for the Native American Style Flute. The latest addition to his collection is a Ancient Kauri low A flute. 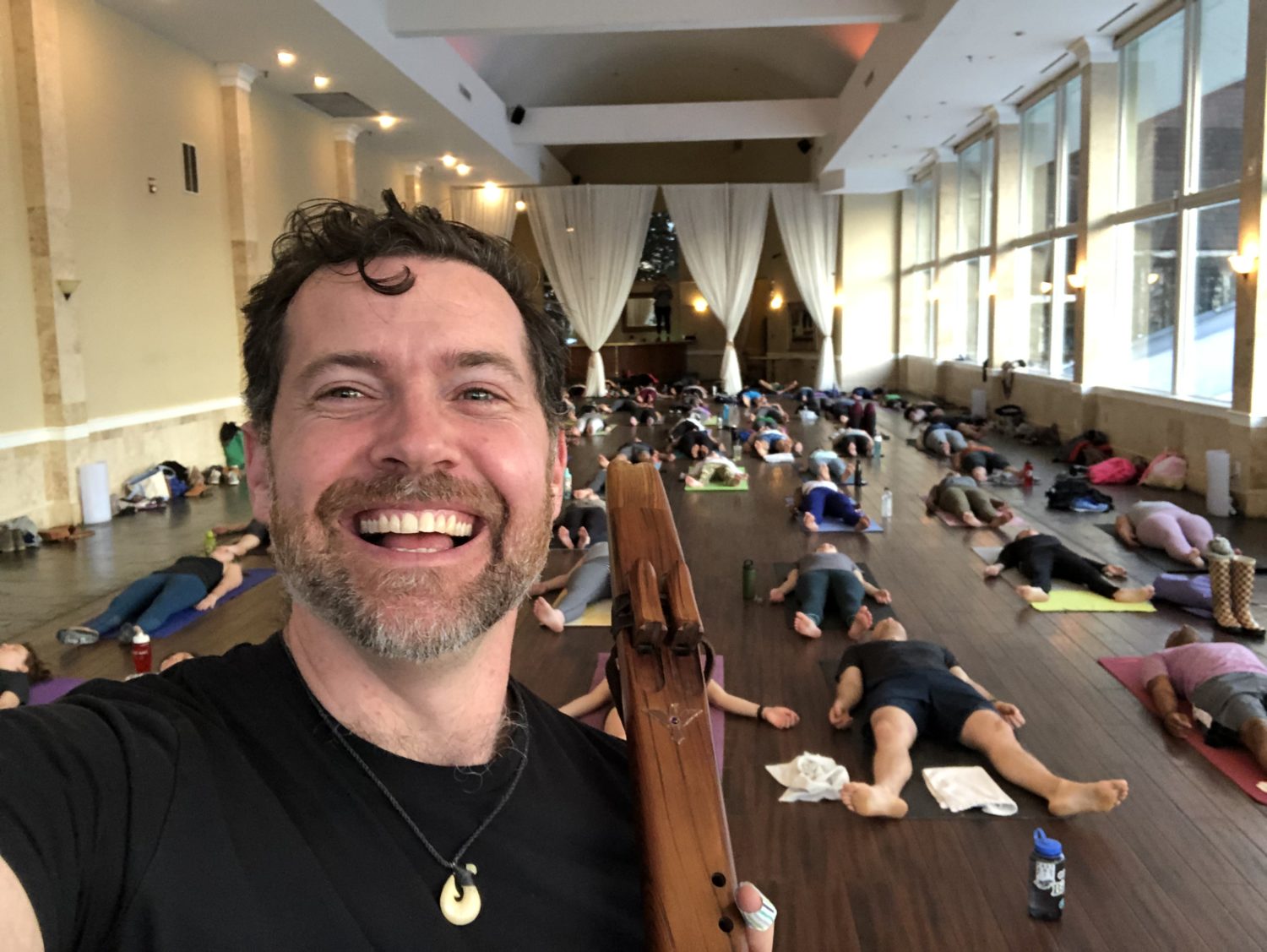 Bronkar is a peak performance expert, author, internationally acclaimed performer, entertainment producer, and keynote speaker. He uses his authentic passion for connecting with people and his creative talents (which he’s honed through discipline and commitment) to motivate audiences, lighting a spark of possibility and delivering powerful results. 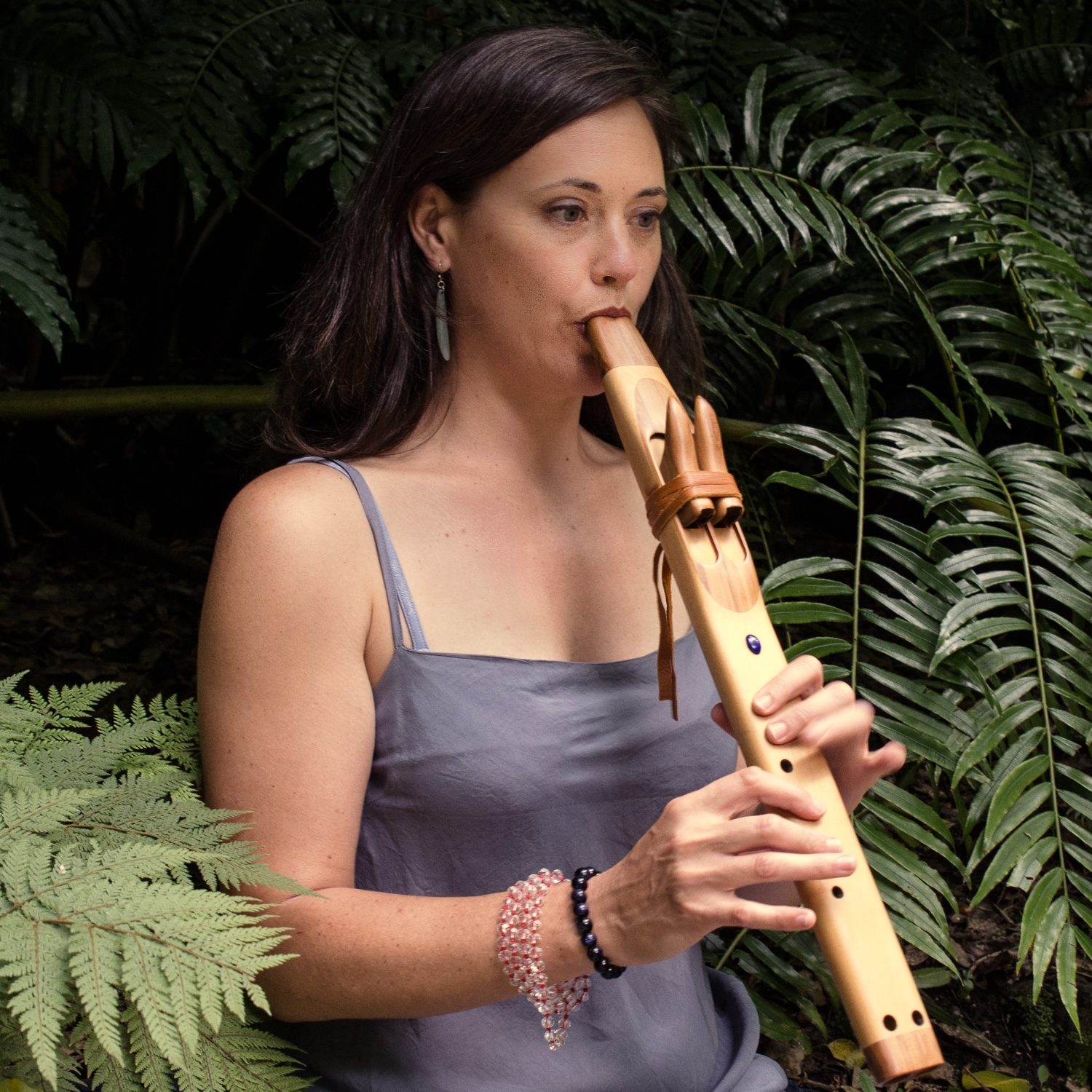 Premratna (Sarah Spence) is a singer/songwriter, kirtan artist and yoga teacher. A classically trained singer, her musical inspirations have included living and spending time at ashrams (residential yoga centres) in Canada, Australia, New Zealand and India. Previously as a singer/songwriter, she used the name Sarah Marlowe.

Premratna translates as ‘jewel of unconditional love’. Sanskrit names are often given in yoga traditions with the intention of reminding the recipient of their highest potential.

On her debut album, she plays a Drone Flute in the key of A minor, crafted from Fijian Kauri. 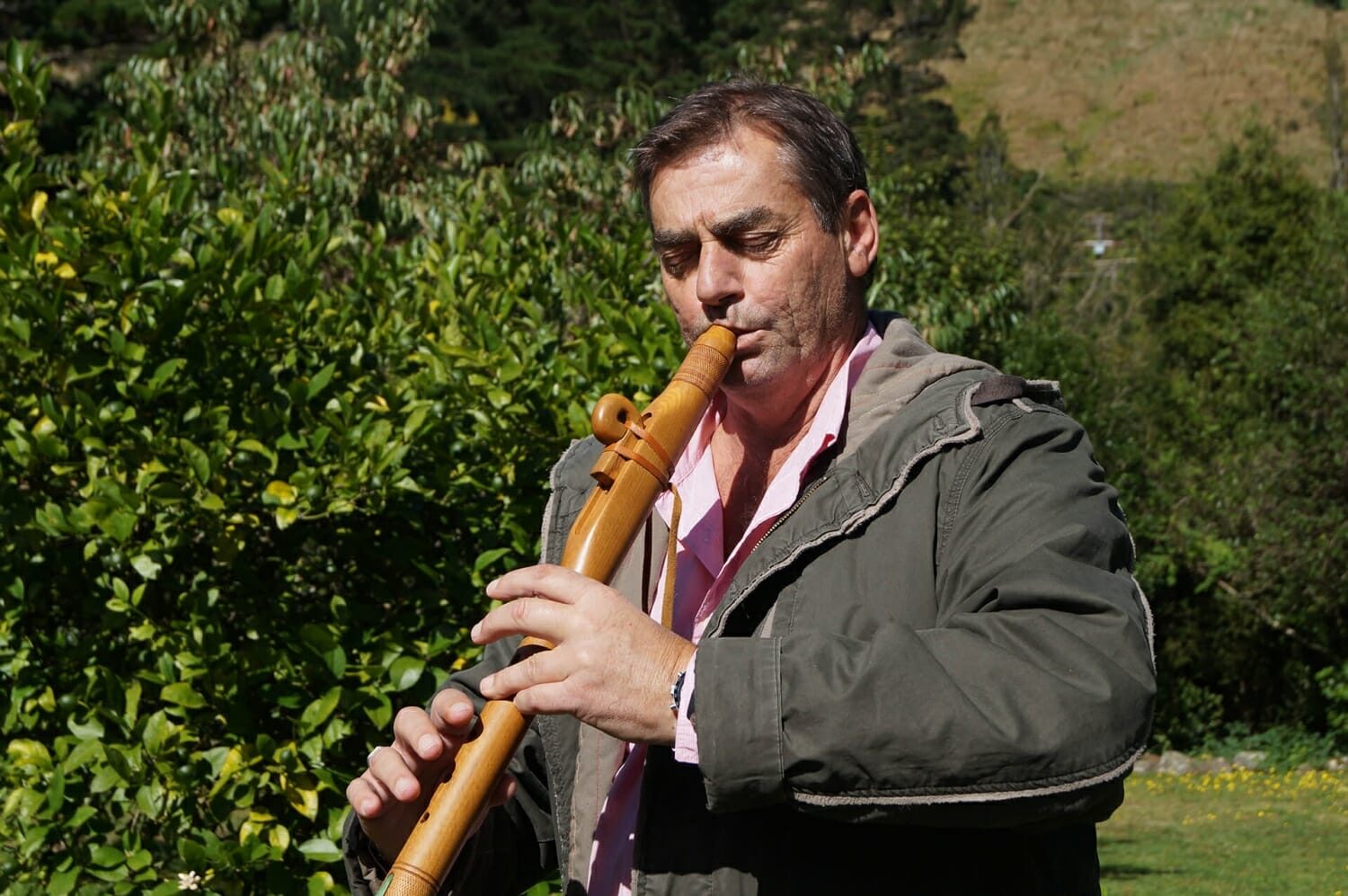 In 2016 I said goodbye to my dear friend and business mentor Rob Harding who died of cancer.

I first met Rob in 2011 at a Saturday craft market (the same market at which I met Adam Page). Rob purchased a flute thinking it would make a great ornament in his hallway. Self-identified as ‘not musical’ Rob was curious and started playing this flute. Every single day. His massive enthusiasm led him to become a close friend and business mentor for Southern Cross Flutes, as well as a stalwart at Flute Circles and Flute Camp Aotearoa.

Rob played and grew with the Native American Style Flute since 2011. During that time Rob performed live on numerous occasions, notably, over the years, at Futuna Chapel as part of the Colours of Futuna Concert Series. Creating narratives to share alongside playing his flutes, Rob crafted a niche within the flute playing community in New Zealand with his enormous passion for sharing his skills, new scales and his songs.

Rob will be dearly missed by the Native American Flutes community in New Zealand, and especially myself. Kia kaha Rob. 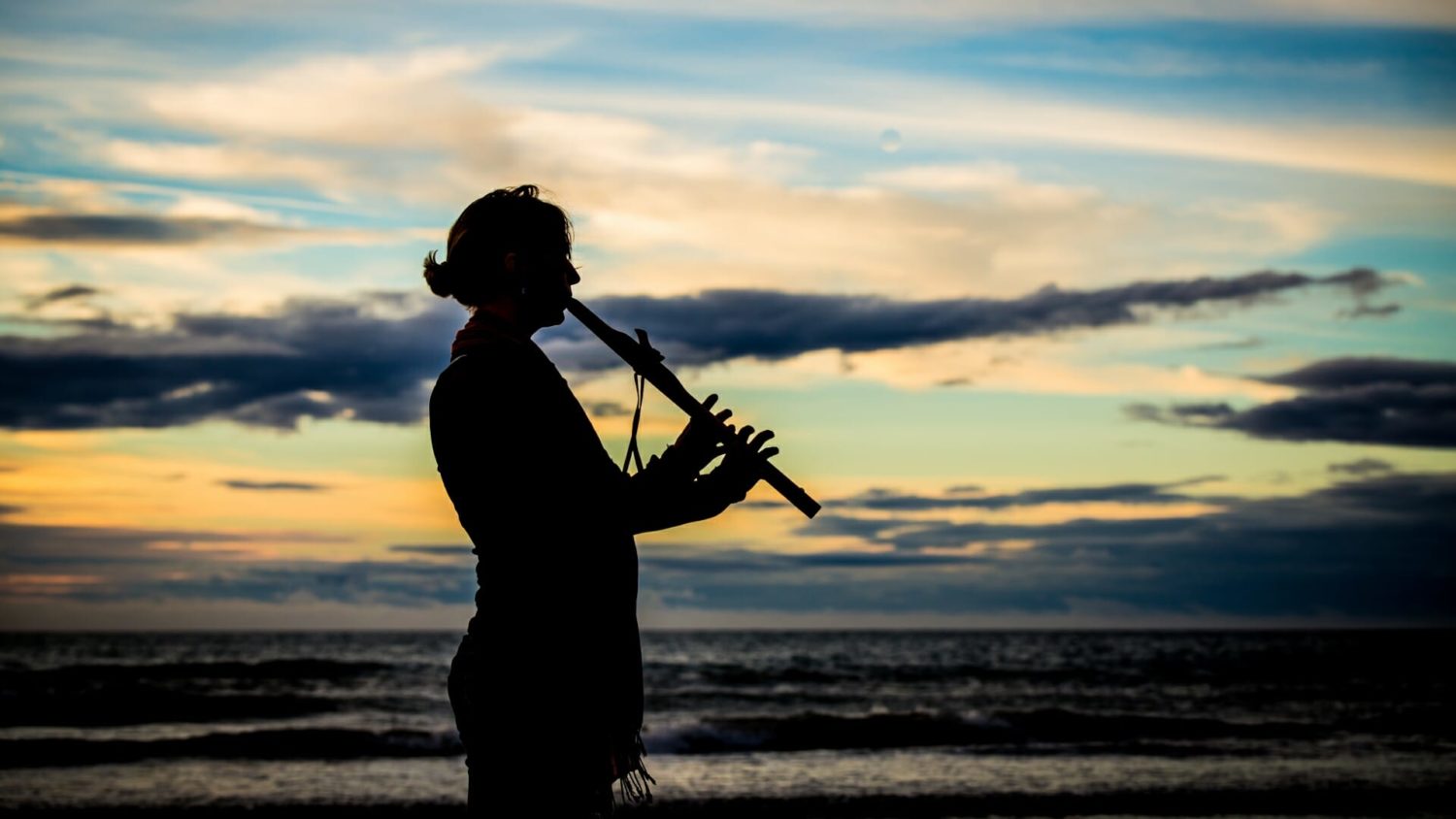 Jordi Cordwell first encountered the Native American Style Flute in 2012. After admiring the soothing sounds of the flute from afar, Jordi soon found that playing the flute could be an even more enjoyable experience. This came as quite a surprise to Jordi, having had very little musical-instrument playing experience previously. Soon Jordi was playing several of her favourite melodies, and she continues enjoys the peaceful space the Native American Style Flute brings to an otherwise busy life. Jordi says a key factor in her flute learning journey is the ongoing support of Southern Cross Flutes and the flute community, through learning resources, flute circles, and flute camp.

I remember the day Jordi and her husband Rowan came in to Frank Kitts Market (the same place I met Rob Harding and Adam Page). Jordi spent some time looking over the flutes, and a few days later came by my workshop to select her first flute. Since that day Jordi has continued to thrive with her flute, joining in our flute events, as well as being one of the solo flautist in the Colours Of Futuna Concert Series. You can see Jordi in many of the featured photos on this site and in other Southern Cross Flutes publications. 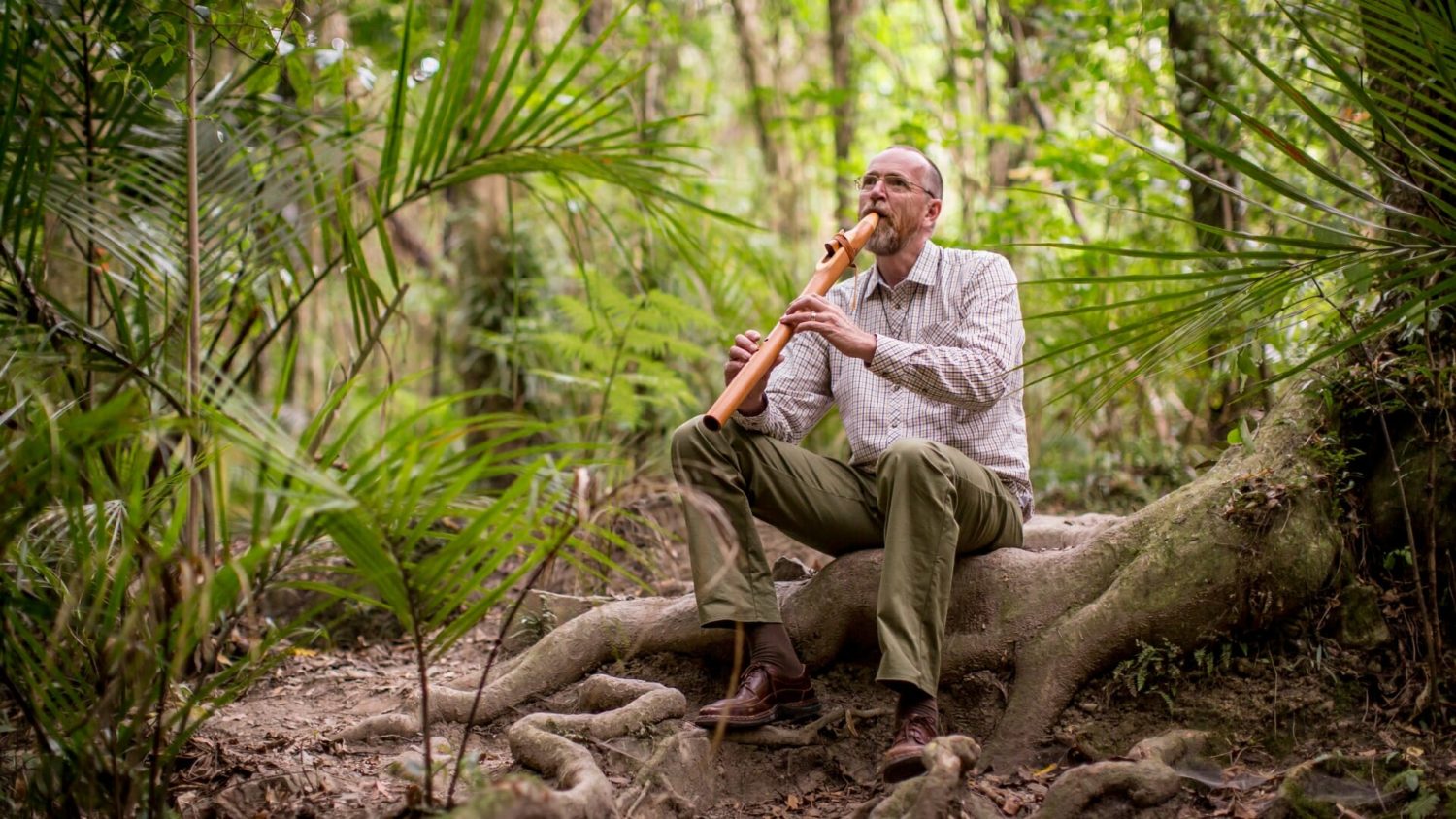 Ross is a Hospice Chaplain, taking his soft Grandfather flute to the bedside of his end-of-life patients. Ross prays and plays.

We were told of a sweet story by a person we got talking to at our local playground. She shared how she really wanted to play a Native American Flute after hearing a chaplain play for her dying father. She was staggered and overjoyed to discover she was telling the story to the craftsman of the flute that so peacefully sent her father to the otherside. 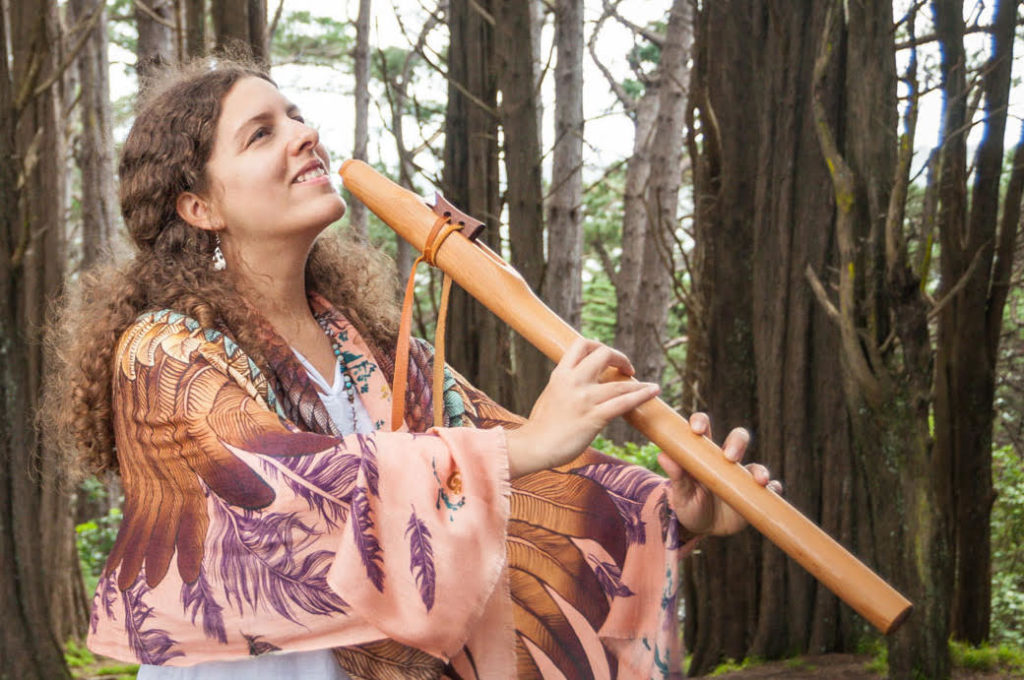 Carolin Nobles is a singer-songwriter and sound healer that loves to try any instrument she can get her hands on. Her collection of instruments includes the celtic harp, native flutes, shaman drums, koshi chimes, singing bowls and others.

Shortly after she arrived in New Zealand, she heard SIKA play his Southern Cross Grandfather C flute at a concert and she was instantly in love with that flute! Soon, she got in touch with Todd to order her own set of beautifully crafted flutes and share her passion for those instruments via Youtube.

She has created a recorded sound healing session called “Love and Joy” where people can experience the power of sound healing in their own home, plus she offers to create custom healing songs for people all over the world.

Her path has led her from Germany, her home to Hawaii, where she got initiated as a sound healer, to New Zealand where she now enjoys taking her flutes to the Native New Zealand forest to enchant whoever is listening.